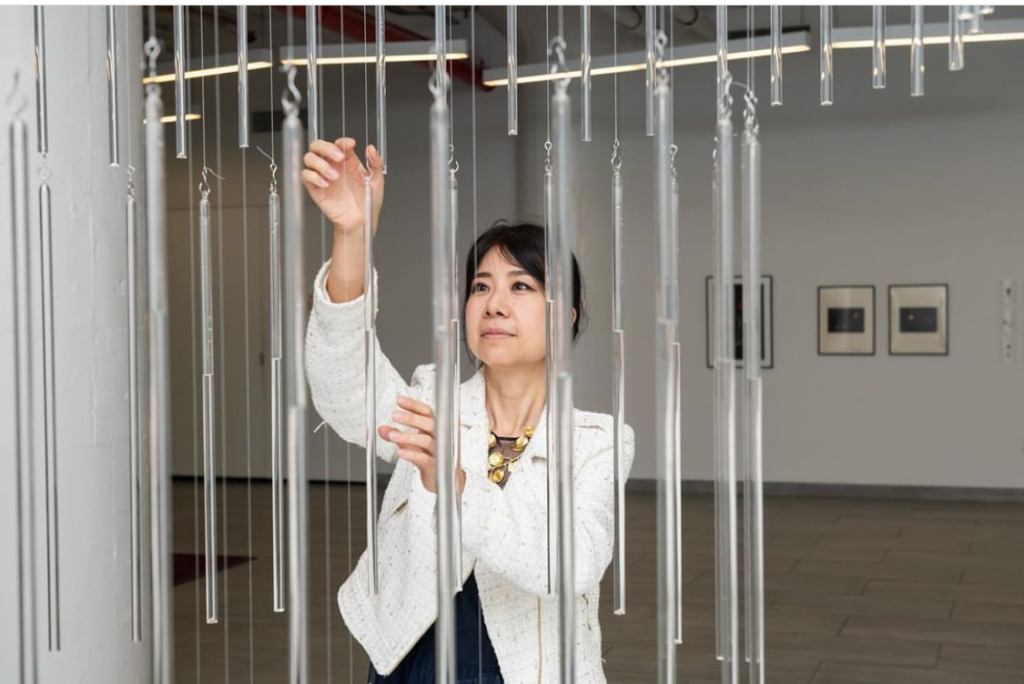 Yoko Shimizu: Around the World and Back – to New York

As artists visualize abstract concepts and scientists conceptualize what is visible, both disciplines seek to elucidate the experience of matter as it coexists in our world and beyond. For our well-being, where nature becomes disrupted, medicine has the great fortune to study science and practice it as an art in the hopes to enhance life or cure disease. Arguably, it is the extension of this consummate art that generates breakthroughs in the mind, body and soul to back to restorative states or perhaps, even new frontiers.

One bioscience-artist, Yoko Shimizu, combines art and science through talent, research and ingenuity from what is visibly known and unknown. Yoko, born in Kyoto, Japan relocated to New Jersey, United States, where as a child, her talents were nurtured and inspired by both her family and New York’s contemporary art scene. In a 2016 interview, Yoko mentions her heroes as Leonardo da Vinci, Thomas Edison and Elon Musk. She recalls visiting the Thomas Edison research center at Menlo Park in New Jersey.  “At the park, you can see Edison’s residence and the many inventions that he made, and I was fascinated not just by his experiments, but also how he created the concept of R&D and collaborative research with creatives from all walks of life, from designers to engineers to artist to scientists.” For Shimizu, biotechnology, as a multidisciplinary collaboration, “is the perfect vehicle for moving humankind closer to nature”.

“If you take just one body part of one creature — the shape is not just beautiful, it is also alive, functional, and constantly evolving.”

Early Vocation in Technology and Design

After returning to Japan for high school, Yoko attended Kobe University where, in pursuit of her other passion of science, she studied biochemistry. Shimizu believed the confluence between science and technology would become an emerging field and although she had been passionate about both art and science, Yoko would have to select only one path for university. Her career began at an advertising firm in Osaka that was seeking an individual with a background in both technology and design. It was this start-up that Yoko would ultimately become creative director. At that time, the CEO was a woman and Shimizu recollects that “She had a feminine leadership style, which was friendly but firm and effective in dealing with clients. I thought that was an interesting management style that I really respected.” Shimizu later worked in music and art broadcasting where she established the arts program at a Japanese radio station, and subsequently prospered onto public relations.

During this same time in her career, Yoko began her own research in science and art. Of her favored subject in her creative works, micro-organisms, the artist says they are “microscopic, while also appearing to be galactic”.

“Yeast cells, for example, are very pretty. In one exhibition, I wanted to show how they proliferate, so I created a gallery space that resembled an R&D ‘clean room’.”

The artist also uses cellulose to cultivate what she calls “bio-textiles.” “I want to see how many of the things around me — like textiles and appliances — I can cultivate using cellulose, in the same way that people have done with silkworms and silk to create cloth.”

Shimizu’s installations of microorganism cultures are displayed on a wall where you can experience, contained within their closed environment of petri dishes, the evolution of exponential growth and deterioration. The exhibition is meant to induce reflection on life.

A Creative Lab of Her Own

Coming into her own creative life, Yoko was producing works in her grandfather’s old warehouse in Nagoya. Her first public exhibition was in 2008 and later Yoko branched out to start her own laboratory, Lab +1e,  in Minato, Tokyo. The  Japanese characters of the artist’s first name, Yoko, can be read “proton’”,  shares the Japanese-born artist.  The electric charge of a proton is  +1e, thus +1e lab was born, she states. From then, Shimizu produced innumerable global exhibitions and received countless awards for biology-inspired installations that both integrate art and science.

In 2020, Shimizu joined Ars Electronica FutureLab in Linz, Austria as Artist and Researcher where she currently develops innovative technologies, methods, and installations that combine science and art. The artist researcher works with companies, government entities, universities and museums worldwide. Since 1979, Ars Electronica, led by Hannes Leopoldseder (AT), has been analyzing the digital revolution. From 1996, together with artists, scientists, technologists, designers, entrepreneurs and activists from all over the world, the collective has been developing projects, strategies and competencies for digital transformation to focus on new technologies to transform the way civilization lives and works together for the future.

Yoko is also the founder and director of the Matsudo International Science Art Festival and a co-founder of Beyond Earth.

Beyond Earth is an all-female international transdisciplinary artist collective with a mission to explore the perimeters of art, space, and biology through space-bound artworks. In collaboration with companies like, BioBAT Art Space, Space Perspective, and Mindshare, Beyond Earth utilizes scientific and artistic research to-create and deploy artworks in space. “As artists, we believe that the sky is not the limit and creativity is boundless, accelerating culture and vision that transcends us.”

Around the World and Back – to New York

In February of this year, Beyond Earth collaborated with Twist Bioscience launching a project to low Earth orbit and the Moon. ”To Space, From Earth”, was a selection of high-resolution artworks stored in a capsule. The artworks of the Beyond Earth co-founders, Elena Soterakis of New York, NY; Richelle Gribble of Los Angeles, CA; and Yoko Shimizu of Linz, Austria and Tokyo, Japan, reference the challenges of the current Anthropocene geological age facing preservation of Earth’s biodiversity, human population growth and consumption and degradation. To store the artworks in DNA, they were digitized and

converted from binary data to the DNA bases represented by the letters A, T, G and C. The encoded DNA sequences were synthesized with Twist Bioscience’s silicon-based platform and preserved in a specialized capsule. The collective affirms, “DNA is nature’s oldest and most resilient data storage method; no energy or maintenance is required to preserve it; it is ultra-dense and hence compact; and lasts hundreds of thousands of years making it the ultimate time capsule for any digitized artwork.”  This transformative project is to reveal how space evolves artworks from the biosphere, and what impact space travel would have on their message over time. “Beyond Earth is not only exploring the unique storage capabilities of DNA, but also testing data retrieval after exposure to harsh conditions of space”.

Back down on earth, in Brooklyn, New York, “Vibrant Matter”, a decade’s worth selection of Yoko Shimizu’s artistic and scientific research exploring the intersection of microbial systems and emergent technology, is on exhibition at BioBAT Art Space. The gallery, dedicated to the intersection of arts, science, and technology, is located in the biotech incubator, BioBAT Inc. at the historic Brooklyn Army Terminal. “Vibrant Matter”, displays Yoko’s works with novel techniques and materials revealing stunning transformations of organic matter and the beautiful “invisible intra-acting forces” in natural scientific phenomena. This, Yoko’s largest solo exhibition in the United States to date, opened last week, October 8 and runs through April 28 2023.

The Coincidence of Science and Art: Expressions from New York Pathologist and Artist Zahra Jlayer