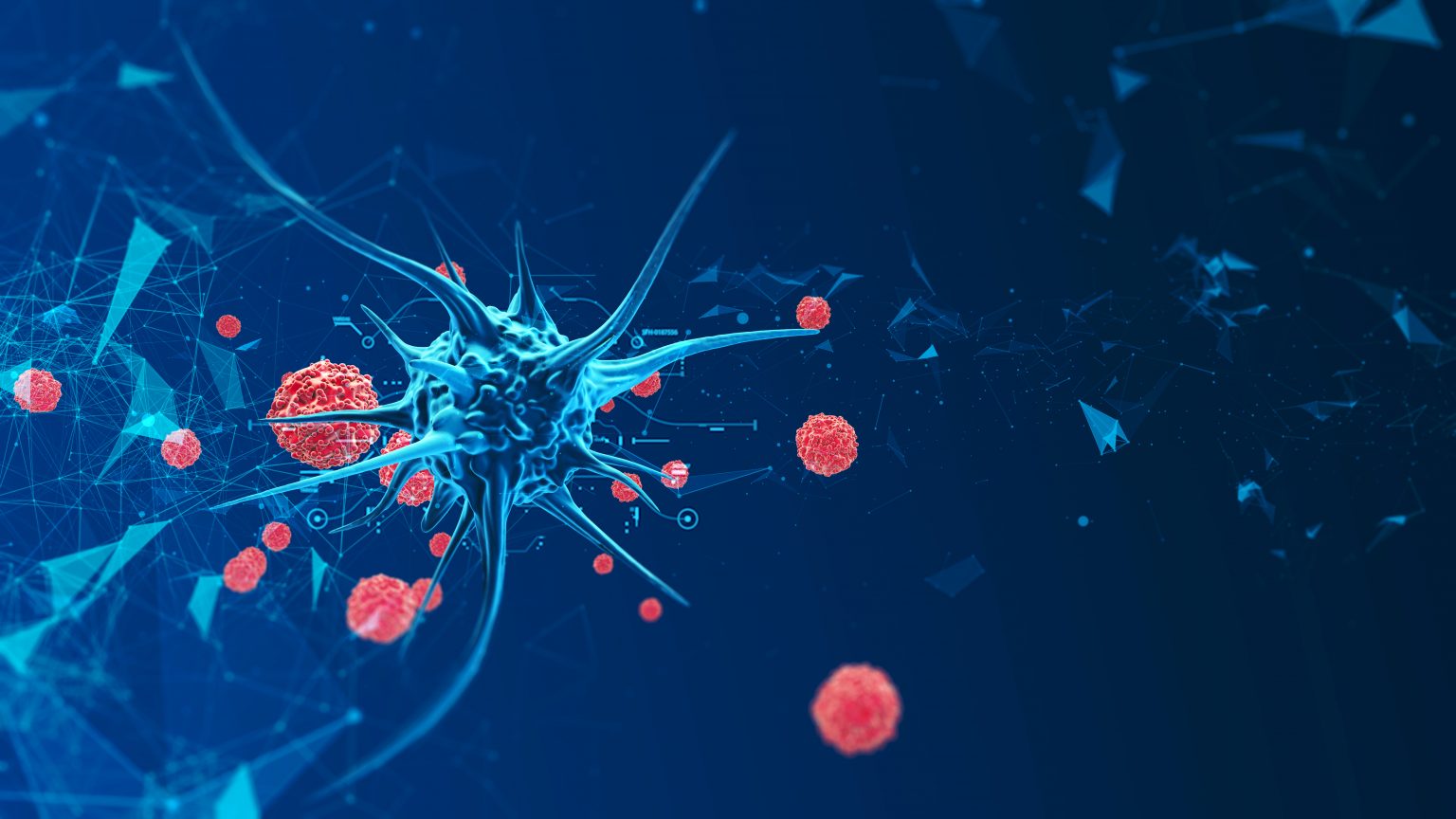 Virus in the microenvironment
Feature Stories

One company’s approach to breaking barriers within the TME to overcome recalcitrant cancers.

Earlier this month, a preview of patient-derived biomarkers and preclinical data that demonstrates strong potential in treating patients with immune-excluded tumors such as colorectal, ovarian, pancreatic, triple negative breast cancer and non-small cell lung cancer was presented at the Stifel Healthcare Conference in New York. Parthenon Therapeutics showcased this evidence and anticipate its first in human clinical trials of their lead asset to begin in the latter half of 2023. In late 2021, the company announced the publication of a manuscript in the prestigious peer-reviewed journal Nature. This study elucidated the role of discoid domain receptor 1 (DDR1) in the structure of the extracellular tumor matrix (ECM). The experiments – done by Dr. Rong Li, Ross Professor of Basic Science Research in the Department of Biochemistry & Molecular Medicine at the School of Medicine & Health Sciences at George Washington University, and Dr. Zhiqiang An, Professor of Molecular Medicine and recipient of the Robert A. Welch Distinguished University Chair in Chemistry at the University of Texas Health – showed that if DDR1 can be neutralized, it is easier for human immune cells such as lymphocytes to infiltrate and destroy the tumor. Since DDR1 is vital to the structural integrity of the ECM, when it is inactivated, it significantly disrupts the mechanical barrier around the tumor.

This knowledge is the basis of Parthenon Therapeutics’ fit-for-purpose drug development approach. The company’s PRTH-101 program, which aims to use targets such as DDR-1 to break down mechanical barriers surrounding tumors, is novel because it addresses the problem of immune exclusion, which is when immune cells are unable to penetrate the tumor core due to barriers in the TME.

The tumor microenvironment (TME) is a key regulator of tumor progression and therefore significantly impacts patient outcomes. It is a highly regulated ecosystem that includes immune cells, the extracellular matrix, and structural cells like fibroblasts. When a tumor grows rapidly and uncontrollably, it leverages the tumor microenvironment to grow faster and spread across the body.

The TME plays a key role in recalcitrant cancers, which are cancers that have a 5-year survival rate of less than 50%. Pancreatic and lung cancers are two major recalcitrant cancers, which have 5-year survival rates of 6% and 16%, respectively. These two cancers alone kill up to 160,000 Americans annually. The Recalcitrant Cancer Act was passed by the Obama administration in 2012 and provided funding to the National Cancer Institute to develop scientific frameworks for recalcitrant cancers to increase survival. Since 2012, significant progress has been made in understanding the TME and its structure. Parthenon Therapeutics’ PRTH-101 approach takes full advantage of this knowledge. In the company’s 2021 Nature manuscript, the ability to perforate the tumor’s protective barrier using DDR1 as a target was demonstrated in several preclinical models of triple-negative breast cancer. DDR1 is expressed in a wide variety of other human tumors, so this successful approach is an unprecedented point of intervention for the future of cancer therapeutics.

The company’s COO & Co-Founder, Olga Granaturova, brings more than 25 years of experience in the pharmaceutical and biotechnology industries. She has led teams to deliver over 20 different clinical candidates to market and has facilitated many multi-year, multi-million dollar deals. Prior to working at Parthenon Therapeutics, she was Vice President at Evotec, where she led initiatives for treating rare monogenic CNS disorders. In October of 2022, she was named to Inc.’s fifth annual Female Founders 100 list, honoring women whose innovations and ideas are changing the world.

“Parthenon Therapeutics has achieved impressive results since its founding in 2019. We’ve built a pipeline of first-in-class therapeutics and a platform designed to generate a sustained cadence of novel therapeutics over the long arc of the company and have already enabled the discovery and development of a first-in-class therapeutic heading into the clinic in 2023,” said Olga Granaturova. “But what I’m equally proud of is the inclusive culture we’ve built. That diversity is a key ingredient of our success.”

Parthenon Therapeutics aims to bring the PRTH-101 approach to clinical trials and eventually into doctor’s offices and hospitals in 2023. Under the leadership of someone as dynamic, innovative, and high-performing as Granutova, the future of the company is undoubtedly bright.